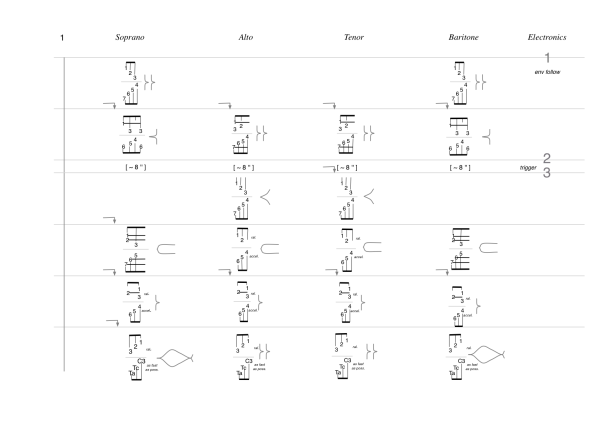 The piece explores the space between determinacy and indeterminacy in regards to the use of musical materials between the four instruments. This results in an ambiguous musical environment in which precision in the articulation of pitch and timbre is conflated with derivative events arising from a disjunction in playing techniques.

The quartet is treated both as a whole and as a discontinuous aggregate of four instruments which themselves become dissected by playing techniques which require the performer to revisit the habitual body-instrument relationship.

The piece was commissioned by the Quasar Saxophone Quartet.

Celebrated for its energy, audacity and exceptional technical ability, Quasar explores different aspects of artistic creation from instrumental music to live electronics, from improvisation to instrumental theatre. It aims to contribute to the development of our musical language and provide a platform for new music experiments, exploration and production. The quartet has played throughout Canada, and has also toured in several European countries. Involved in the area of live electronics since 2002, Quasar has taken part in its constant evolution, notably with events like Électrochocs (Opus prize), Électro Energico (Opus prize), Ondes porteuses and Ondes de chocs. Its 15 creations involving live electronics constitute a significant contribution to this body of work.