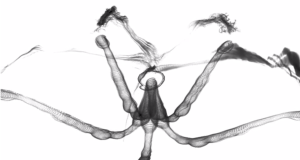 Netrooms: The Long Feedback is a participative network piece which invites the public to contribute to an extended feedback loop and delay line across the internet. The work explores the juxtaposition of multiple spaces as the acoustic, the social and the personal environment becomes permanently networked. The performance consists of live manipulation of multiple real-time streams from different locations which receive a common sound source. Netrooms celebrates the private acoustic environment as defined by the space between one audio input (microphone) and output (loudspeaker). The performance of the piece consists of live mixing a feedback loop with the signals from each stream.

Netrooms is designed to take advantage of the latency inherent in commonly available audio streaming software.  The typical delay between musical gesture and articulation at a remote site is approximately six seconds.   The visualization for Netrooms takes advantage of this extended delay by sending a secondary data-stream from each site directly to the main performance site containing audio amplitude metadata.  Because of the compact nature of this data, and the direct connection to the performance site (i.e. the stream doesn’t need to go through an external server), the audio metadata arrives well before the actual audio that it refers to.  The temporal difference between the audio data stream and metadata stream allows for the visualization of the audio coming from each site before it actually is heard.  The visualization of each site is laid out in a star-formation with the points of the star representing each remote site, and the centre of the star representing the main performance site.  Amplitude data is visualized as a stream of brush-strokes with larger brush strokes representing louder data.  Each of these sites visualizations is given a distinct visual representation, and synchronised so that the visualized amplitude data reaches the centre of the visualization at the same time as the audio is heard in the performance space.

For more information on Netrooms performances and live blog check out http://netrooms.wordpress.com

Previous Performances of Netrooms include:

5th September 2011, 18:30
The University of Nottingham, Ningbo China
Digital Resources in the Humanities and Arts 2011

January 2010
Happening Festival, Calgary
This performance of Netrooms will be mixed live at the Sonic Arts Research Centre in Belfast and transmitted to Calgary using ambisonic technologies and will be presented as part of Nettets 2010: Telemusic Concert at the Happening Festival, Syneme Telemedia Arts Lab ay the University of Calgary.

November 2009
Nethalls by the Wireworks ensemble at Kampnagel Internationale Kulturfabrik GmbH Theater as part of the Klangwerktage, Hamburg

11th December 2008 Belfast, UK
7:30pm (UK Time) with SARC, RPI (NY),  Banff and Locus Sonus. The performance is in the context of Disparate Bodies 3.0 and the opening of the Fragmented Orchestra in Liverpool. The performance is an open platform/rehearsal for the EU Culture 2007 Comedia project.

The performance was commissioned by percussionist Jonathan Shapiro and will take place on Sunday 4th April at the Staller Center music wing, Room 0111 (choral room) at Stony Brook University in Stony Brook, NY

Netrooms [for percussion] explores the sound of a local percussionist as it travels through various acoustic environments. Each participant will set up a microphone capturing a space as nearby  loudspeakers stream the sound of each percussion instrument. Please choose unique and perhaps extreme acoustic spaces such as bathrooms, concert halls, outdoors, domestic spaces, outdoors etc…
Participants will not be required to produce sound but incidental sound from the environment is welcome…

First use of iPad in a concert? 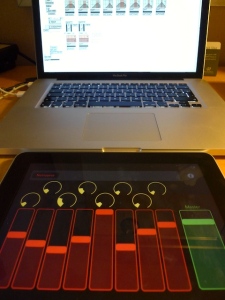